As the local season gains momentum, we hit the dusty road last week to meet up with some of the Oregon farmers we regularly support, and to explore opportunities with some growers new to our program. Oregon has seven distinct agriculture regions which produce everything from seed crops, grains and cattle to produce and pinot noir. It’s the produce we’re after, and the focus of this trip was the Willamette Valley, where we visited eight farmers between Clackamas and Eugene. 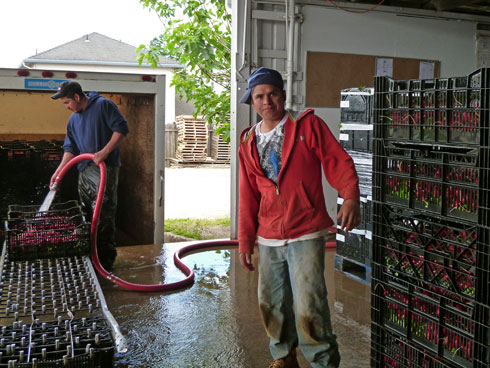 Sunny skies and temperatures in the seventies were a welcome change from Washington’s slow-to-begin summer. The first stop was at Siri & Sons, whose produce we’ve bought for many years. Joe Siri is the fourth generation of an Italian family whose patriarch, Antonio Siri, cooperatively farmed with 14 other Italian immigrants on land now within Portland’s metropolitan area. These early entrepreneurs established a thriving fresh market which served Portland for decades. When the farms were displaced by urban residential development, the families relocated east and the Siris eventually landed in Clackamas, where their home farm is still located. As late as 1968, their neighbors were three dairies and a strawberry farm. As development once again encroached, many took the opportunity to sell their land and get out of farming. But not the Siris, who have survived by adapting to changes in both the landscape and the marketplace. 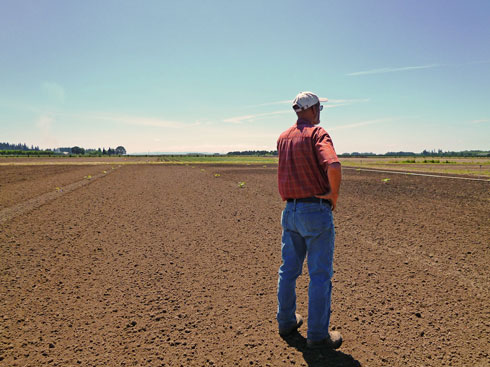 Farther south, we stopped by Mustard Seed farm, where David and Nancy Brown have been farming for over 40 years. In addition to a CSA and commercial vegetable sales, their 75-acre farm serves as a community garden where members trade work in the fields for a generous supply of fresh vegetables. At Evergreen Gardens in Oregon City, second-generation farmer Ambrose Calcagno grows 80 organic acres and is transitioning more of the family’s conventional acreage to organic practice. His red leaf lettuce and radishes have been some of the first northwest items in our boxes this year. 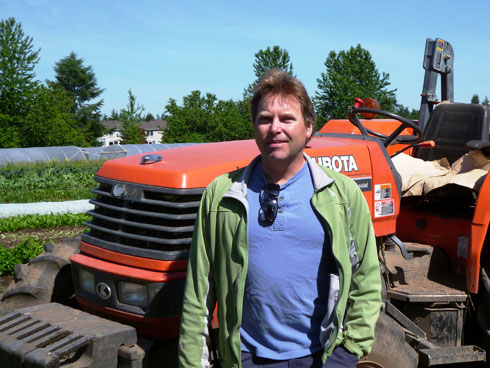 At Gathering Together Farm in Philomath, John Eveland and Sally Brewer grow vegetables and berries, operate a wonderful farm stand and restaurant, and work with Frank Morton of Wild Garden Seed to breed and grow organic and open-pollinated varieties suited to northwest conditions. We’ve got our eye on their butternut squash crop for the fall; butternut requires just about two weeks more warm weather than we’ve got in our neck of the woods. Also of interest to us is the fact that John and Sally, along with Jamie Kitzrow of Spring Hill Farm in North Albany, are the first regional farms to become certified by the Agricultural Justice Project, a domestic fair trade label that represents the gold standard for social justice in agricultural and food jobs. 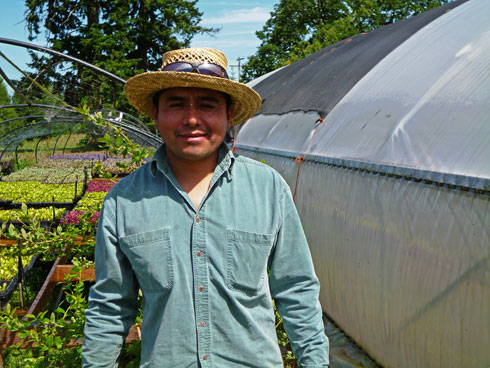 Cinco Estrellas and Nuevo Amenecer are a pair of mixed row crop farms operated by two generations of the Cruz family in Junction City. Cinco Estrellas (Five Stars) is named for Roberto’s five children, who were raised on the farm; his daughter Maria operates neighboring Nuevo Amenecer (New Dawn) with her husband Juan Aparicio. Some farmers love to talk, but as Juan showed us the farm, he let his beautiful fields speak for themselves. Finally, we ended up at Groundwork Organics outside of Eugene, where Gabe Cox and Sophie Bello farm on sandy Willamette loam up to ten feet deep. It’s enough to make a farmer weep. Having both worked on organic farms in the area, they met and decided to start a family farm of their own, and have grown from 10 to 75 acres in just a few years. When we visited, strawberry harvest was underway, and a new farm stand was under construction.

Our travels brought us to family farms ranging from forty-five to three hundred acres; from operations dating from the 1920’s to those begun in the last decade or so. Each one is unique, and although each farmer’s voice has its own character, they all speak the same language of hard work, care for the soil, and earning a livelihood for their families through practices which will sustain generations to come.

Have you seen any of these farms produce in your box yet? Keep your eyes open and let us know what you think. Know of a great organic farm we can work with? Let us know in the comments below.