Much has already been written about the recent study from Stanford University claiming that organic foods are no more nutritious or healthy than non-organic foods. In short, the researchers concluded that an apple is an apple and all lettuce was created equal — no matter the food’s provenance, how it was chemically treated in the field, or how many miles it traveled to reach your table.

“There isn’t much difference between organic and conventional foods if you’re an adult and making a decision based solely on your health,” said Dena Bravata, MD, MS, the senior author of the study.

As a farmer and a father, I strongly disagree, and I think the Stanford study sends a terrible message to U.S. consumers. Here’s why:

The word “conventional” may sound relatively harmless when used to describe the food we eat, but the reality is our nation’s “conventional” factory farms use far more pesticides, herbicides and fungicides than most consumers realize when shopping for produce or preparing a family meal.

Granted, conventionally grown foods have to meet the Environmental Protection Agency’s minimum safety threshold when it comes to the amount of traceable pesticides. But the Stanford report fails to appropriately consider the compounding effects that multiple chemicals ingested through different foods may have on our long-term well being, or the effects they have on vulnerable populations like pregnant women and small children.

As a parent of two young boys, I for one don’t think the minimum requirements are anywhere near sufficient. Consider the chemical chlorpyrifos, an insect-killing organophosphate that has been approved for use in “conventional” American agriculture for more than four decades.

In 2009, more than one million pounds of this pesticide were used in California alone. Yet according to researchers at the Columbia University Mailman School of Public Health, minimal chlorpyrifos exposure, even at very low levels consistent with standard agriculture use, has been proven to cause adverse impacts on brain development in ways that interfere with academic achievement, reading and learning comprehension, and even sexual development. Not to mention the adverse impact that millions of pounds of this chemical, and hundreds of others like it, can have on the soil and watershed that supports delicate ecosystems for hundreds of miles or more. San Francisco Bay? Puget Sound? Gulf of Mexico? These chemicals eventually end up there, many times with devastating effects.

Agricultural chemicals are designed to kill things. They are toxic substances that come with skull-and-crossbones on the containers. Farm workers commonly wear futuristic-looking “hazmat” suits as protection when they spray the fields. In some cases, farmers, workers and even pets are not allowed to enter the fields for hours after treatment.

Farmers and food producers in this country have an opportunity, and an obligation, to provide consumers incentives for making the healthiest choices possible. The debate should not just be about whether a strawberry produced at a factory farm is more or less nutritious than its organically grown equivalent. We should instead be asking: “How can we grow and provide families with the freshest, cleanest, and most flavorful, strawberries possible?”

It’s something we take very seriously at Full Circle, the 400-acre organic farm I founded in Carnation, Wash. My wife and brother were there at the beginning with me, helping to sow the fields from day one. It just didn’t make sense to me to expose them, our customers, our land or our community watershed to toxic chemicals in the name of yield and cost. We’re about purity. Flavor. Freshness. Stewardship.

Full circle. Farm to table. Cradle to grave. These are not concepts that have much resonance in our nation’s industrial food system. But in the words of food advocate and organic pioneer David Lively, “Conventional agriculture is based on a lot of non-sustainable limited-resource practices and principles, and the chickens are coming home to roost.”

It doesn’t take a bunch of academics to tell us that industrial farming isn’t working on many levels. We need to stop debating and measuring how “un-harmful” chemical pesticides are in our food. We need to instead focus on how we can best grow and distribute fresh, pure foods that are as inviting, delicious and healthy as possible, encouraging people to eat more of them and make better overall food choices. We should be giving folks incentives to eat those apples, greens and strawberries – not more reasons to fret over and avoid them. – Andrew Stout, Farmer and Founder, Full Circle

What are your thoughts on the Stanford study? Do you think organics are more than the nutrients in the vegetables or is healthy eating your primary concern? I’d love to get your feedback below.

Andrew Stout on Why Full Circle Supports I522 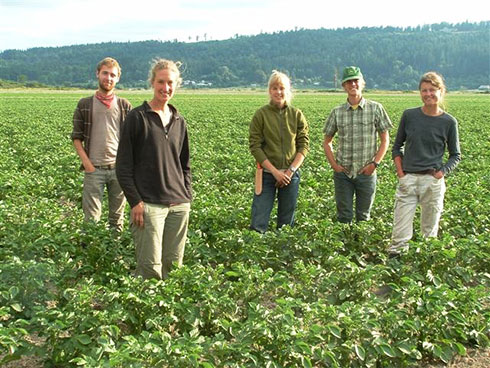 Ag in the Middle