We hadn’t known much about the Mountains-To-Sound Greenway until recently, beyond noticing the signs while traveling the I-90 scenic corridor. The Greenway is an historic and vital passageway between Seattle and eastern Washington, comprising forest, farmland, recreational areas, open space and population centers, about 1.5 million acres in all. Foot trails across the Cascade Mountains near Snoqualmie Pass have existed for thousands of years; Native Americans crossed in both directions to trade and socialize in what is surely one of the Pacific Northwest’s first long-distance cultural exchanges. As settlers arrived and farming, lumber and coal mining operations developed, the route we know as I-90 became a wagon road for goods and services between the east side and the port of Seattle, and was finally paved in 1934.

The upper Snoqualmie Valley, home to Full Circle’s Griffin and Ames Creek farms, has long played a part in the Greenway’s history. Hops, used for brewing, were the main agricultural product and the mainstay of the valley’s economy in the latter part of the 19th century, and an old hop-drying shed in Fall City still stands. Ferries travelled down river to Seattle, where the hops were shipped to San Francisco, England and Germany. Eventually, timber and dairy farming overtook hop production, and are still, along with more recent diversified specialty crop production, the mainstays of the valley. Because of our area’s agricultural history, the folks at Mountain-To-Sound Greenway came to the farm last week to interview us about the role of sustainable farming and local food in our region. Along with many other working farms, Full Circle plays a vital part in maintaining community, open space and habitat, and a vibrant local foodshed. 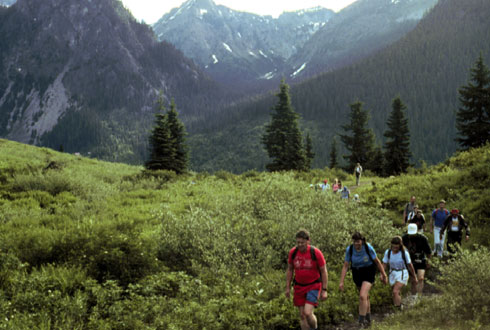 The Mountains-To-Sound Greenway was established in 1990, and the Greenway Trust is a broad coalition of stakeholders that leads and inspires action to maintain the balance between diverse interests and uses of this iconic landscape. Through mentoring relationships and education and stewardship programs, the Trust builds a sense of common purpose and collaboration among groups ranging from environmentalists to city executives to industry leaders.

Find out more about Mountains-to-Sound Greenway programs by visiting their website, www.mtsgreenway.org.