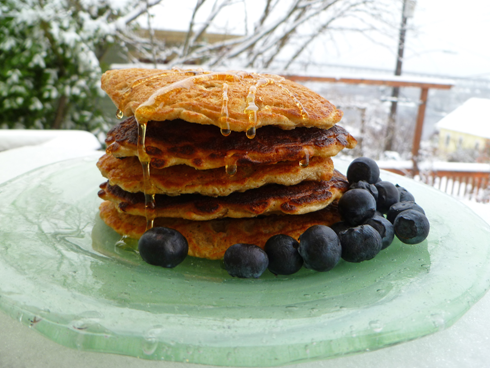 As the reports of snow kept rolling in, we were somewhat anxiously awaiting the big blizzard that had yet to show any signs of heading our way. The beautiful crystal clear skies over my neighborhood showed no intention of changing, but even taking the weather forecasts with a very large grain of salt, I was certain the morning landscape would look decidedly different. Schools would be closed which meant the kids would head out early, armed with saucers, sleds or whatever slippery means they had to go sliding down our frosty hills.

Impassable roads also meant I’d need to work from home, which meant I could actually prepare a comforting late-morning breakfast befitting a snow day. It would have to be quick to whip up, tasty enough to satisfy ravenous teenagers and nourishing enough to please me. These thoughts – and the box of blueberries in the fridge we had treated ourselves to – led me to a recipe for oatmeal pancakes that I’d wanted to try for awhile.

The problem I kept running into every time I thought I’d make these was that they require a step be taken the night before. No big deal….if you can remember. After running into this issue on more than a few weekend mornings this was finally stamped into memory so I pulled out the recipe and less than five minutes later whole grain oats were soaking for the night in preparation for the next day’s brunch. Heading off to bed with nary a cloud in site, I was still skeptical whether our “Snow Day” brunch would actually be necessary.

We awoke to a truly beautiful winter wonderland – a rarity around here – and I promised everyone if they grabbed their usual bowl of cereal and kept out of my way while I got some work done, they could look forward to oatmeal-blueberry pancakes a few hours later. I didn’t have to ask twice and we were all rewarded with a breakfast perfectly suited to snow.

I first discovered this recipe on the Orangette blog and have just made a few tweaks. These would no doubt be better had I used the buttermilk, but I didn’t feel like going to the store and opted for my faux version which never fails me. I also browned the butter (photo below) because if you are going to use melted butter in a baked good is there any reason not to take it a step further and bring that butter to its full caramelized deliciousness?

This recipe also lends itself to numerous variations. Simply place the add-ins into the batter before flipping the pancakes. Grating fresh nutmeg over the bananas was delicious and I’m sure there plumping the raisins in rum first would be a welcome adult indulgence.

Adapted from the Orangette blog

*I use this as a stand in for buttermilk all the time and it works great. Put 2 T white or cider vinegar, or 2 T lemon juice in a 2-cup glass measuring cup, add enough milk (whole or 2% work best) to make 2 cups and 1/4 tsp salt. Stir to combine and let sit 5 minutes.

The night before: Combine the oats and buttermilk in a medium bowl. Stir to mix. Cover with plastic wrap, and refrigerate overnight.

Take the bowl of buttermilk and oats out of the fridge. Set aside. In a shallow pan over medium-low heat, brown the butter. Remove from heat and pour into shallow bowl to speed cooling. In another medium bowl, whisk together the flour, sugar, baking powder, baking soda, and salt. Set aside.

Warm a large nonstick skillet or griddle over medium-high heat, and brush lightly with oil. To make sure it’s hot enough, wet your fingers under the tap and sprinkle a few droplets of water onto the pan. If they sizzle, it’s ready. Scoop the batter, about 1/4 cup at a time, onto the pan, taking care not to crowd them, and carefully arrange a few berries or other add-in as desired, gently pushing the fruit down so it not poking out too far when you flip the pancakes. When the underside is nicely browned and the top looks set around the edges, flip the pancakes. Cook until the second side has browned.

Re-grease the skillet, and repeat with more batter. If you find that the pancakes are browning too quickly, reduce heat. 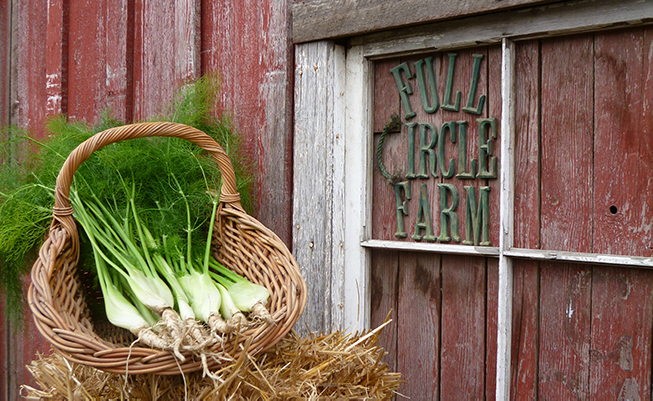